After accelerating during the pandemic in most of 2020 and 2021, the shift of consumer shopping habits to e-commerce have settled into a more normalized level and the pace of online shopping has moderated. E-commerce revenue hit $252 billion as of midyear, increasing 7.3% during Q2, less than half the jump seen a year prior and paling in comparison to the near 54% swelling in Q2 2020, the quarter which recorded the fastest rise during the earliest stages of pandemic lockdowns. It should be noted that Amazon’s Prime Day occurred during the first half of 2021 and did not take place this year until July.

Nevertheless, while online sales have cooled, e-commerce market share continues to grow. At midyear 2022, online shopping represented 20.6% of total retail sales, a slight increase from 2021 but substantially higher than the 14.3% during the same period in pre-pandemic 2019.

The erratic shifts in the e-commerce growth rate have made it difficult for retailers to assess inventory levels. Consumer confidence and spending remained strong heading into 2022, so retailers stocked shelves and leased more warehouses, resulting in record occupancy levels for the industrial real estate market.  At the same time, U.S. ports, many of which are the nucleus of the nation’s Elite 11 industrial markets, continued to report record cargo during the first half of 2022, according to Transwestern Research. 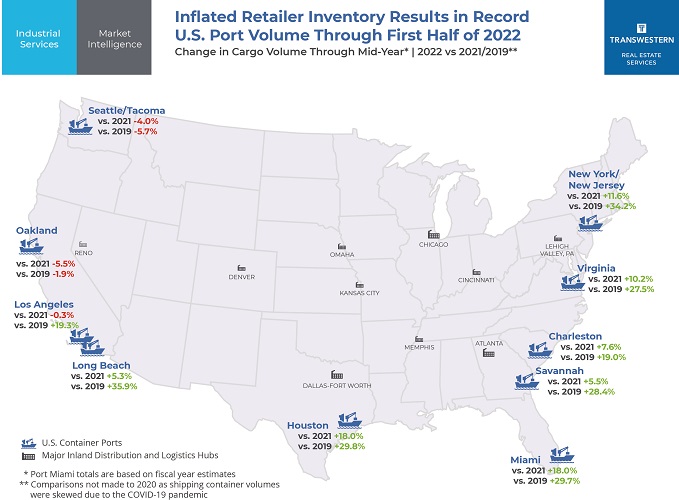 The top 10 U.S. container ports processed 5.5% more Twenty-Foot Equivalent Units (TEUs) when comparing totals for the first half of 2022 to the same period in 2021. Seven of these top 10 gateways reported higher container volumes, with four ports recording double-digit percentage growth. Additionally, total volume increased 23.6% when compared to pre-pandemic levels, as 80% of the top U.S. ports reported double-digit percentage growth for the first half of 2022 when compared to the first six months of 2019, with six ports reporting increases greater than 20%.

As we entered the second half of 2022, the West Coast continued to tangle with supply chain issues, labor negotiations, and warehouse space constraints. As a result, an increased amount of shipping is continually being shifted to entry points on the East and Gulf Coasts, all of which experienced cargo volume increases, as opposed to only Long Beach seeing growth on the West Coast. 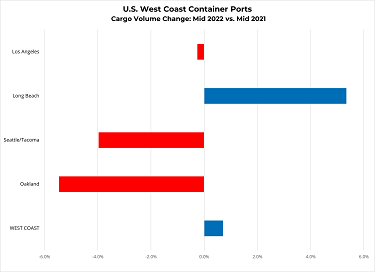 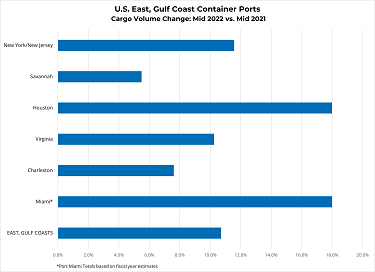 Keeping goods moving through the ports

The industrial real estate sector benefited greatly from the growth of e-commerce and increased consumer spending. However, some retailers, including Amazon, have paused real estate decisions and/or moved to unload space after watching consumer behavior closely over the past six months.

Still, industrial demand continues to outpace new development. If Amazon and other blue-chip companies dump what they consider excess space, other retailers and logistics firms may see it as an opportunity to upgrade, having been squeezed out by extremely constrained market conditions in the past. Newer buildings will continue to thrive. The only potential setback is that older, outdated buildings may find it harder to compete.

The ports are integral to the decisions of industrial owners and occupiers, and backlogs could have a ripple effect on the retail sector and threaten the arrival of products on the shelves in time for the holiday season. Though perhaps not at the pace experienced during the pandemic, purchasing remains steady despite an extended period of high inflation, and the recent drop in gas prices should also contribute to continued strong consumer spending.

Yet port congestion is slowly working its way through the system and, when coupled with lower import totals projected for the balance of the year, should help to alleviate supply chain issues in 2023. 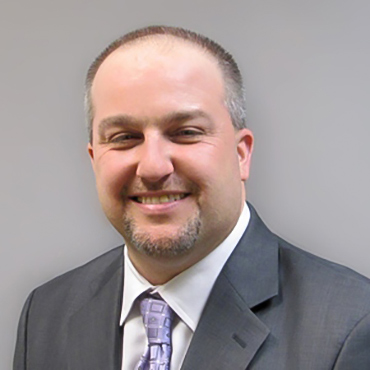