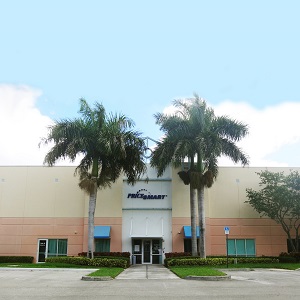 Miami – Transwestern’s South Florida industrial team today announces it facilitated two sublease transactions totaling 70,471 square feet at Flagler Station Phase II in Medley, Florida, for PriceSmart Inc., the largest operator of membership warehouse clubs in Central America and the Caribbean. The transactions consumed what remained of the 262,382-square-foot block that PriceSmart listed for sublease upon migrating the majority of its operations to a brand-new building in Flagler Station Phase III last year.

“Subleasing the final spaces of PriceSmart’s vacated space at Flager Station II comes on the heels of our completion of the 70,424-square-foot sublease with Dade Paper & Bag along with two separate lease terminations totaling nearly 122,000 square feet,” said Eisenberg. “Our team is proud to have expertly delivered on our client’s needs and to have spearheaded PriceSmart’s release from its vacant space at the park years in advance of the lease expirations.”

Miami remains one of the tightest industrial markets regarding vacancy with an average rate of 4.8 percent, according to research by Transwestern. The lack of space over recent years has caused construction activity to heighten with 3.3 million square feet of space under construction, 57 percent of which has been preleased. In first quarter 2018, the Medley submarket reported vacancy at 7.4 percent, a temporary bump caused by the completion of more than 2 million square feet during 2017. The market is on track to absorb the new product and keep vacancy near or at 5 percent.

Transwestern is a privately held real estate firm of collaborative entrepreneurs who deliver a higher level of personalized service – the Transwestern Experience. Specializing in Agency Leasing, Tenant Advisory, Capital Markets, Asset Services and Research, our fully integrated global enterprise adds value for investors, owners and occupiers of all commercial property types. We leverage market insights and operational expertise from members of the Transwestern family of companies specializing in development, real estate investment management and research. Based in Houston, Transwestern has 35 U.S. offices and assists clients through more than 211 offices in 36 countries as part of a strategic alliance with BNP Paribas Real Estate. Experience Extraordinary at transwestern.com and @Transwestern.