Infrastructure Not Making the Grade

The elephant in the room – U.S. infrastructure – is finally getting some attention from Congress. In a meeting last week, Republicans and Democrats agreed that the federal government should make a $2 trillion investment in America’s infrastructure. (Let’s bask in that accomplishment for a bit… though it’s still an if, not a when.)

For many, infrastructure calls to mind roads filled with potholes that need to be repaired. But it entails so much more, and from a commercial real estate perspective, it greatly influences the success of individual projects and the entire industry. Infrastructure takes us to work, pipes water to our homes and offices, processes sewage, conveys freight across the country and enables (relatively convenient) air travel.

In 2019 terms: You want an Amazon delivery the same day? The infrastructure better be in place to make that happen.

There is widespread consensus that infrastructure in the United States has long been underfunded and underdeveloped – evidenced by bridge collapses, transit system shut-downs and water systems tainted by lead. And science backs up this view. Every four years, the American Society of Civil Engineers (ASCE) assesses the nation’s 16 major infrastructure categories and issues its Infrastructure Report Card, which uses a simple A to F school report card format.

The last report card was released in 2017, and if you missed it – or blocked it out in utter dismay – the overall grade for the U.S. was D+. 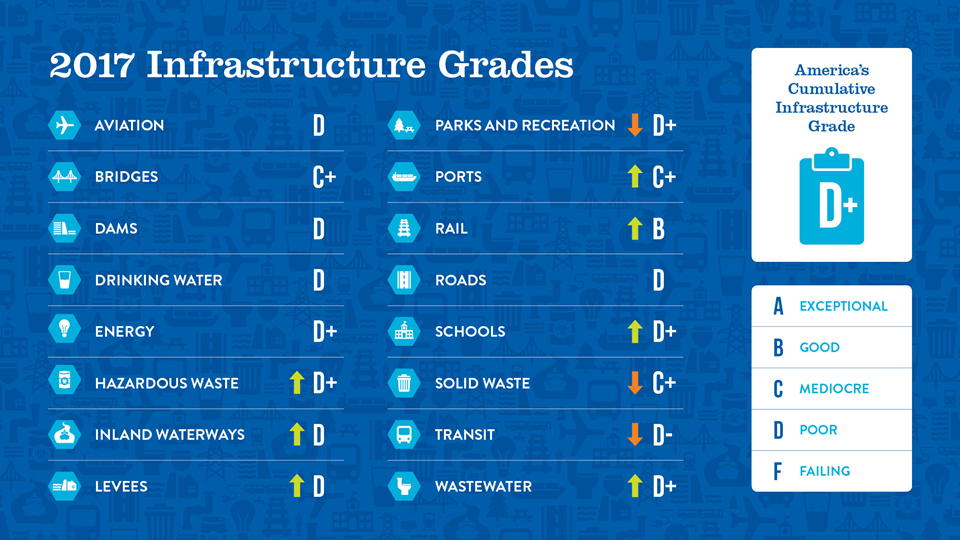 The criteria used to determine this grade include capacity, condition, funding, future need, operation and maintenance, public safety, resilience and innovation. For those who are interested, there are state-by-state grades across the various categories.

With so much data and analyses already done, decision-makers should be equipped to move infrastructure conversations forward. On the bright side, tax credit-assisted programs and public-private partnerships may be able to make up $1 trillion of spending. However, the remainder will be all but impossible to secure without raising the federal gas tax. This tax has been at $0.184 since 1993 and has not been adjusted for inflation or measured against the Consumer Price Index. There’s no denying this is an enormous hurdle for Congress.

Key players – from corporate executives to city leaders to trade unions – are watching closely. All believe that the action on this front will create jobs, improve safety, reduce costs and increase efficiencies. It is a vital part of staying competitive and generating economic development at local and national levels.

For commercial real estate, data shows that almost every infrastructure project leads to rent growth and increased occupancy in its respective market. So, let’s hope next time the ASCE hands out grades, the U.S. brings home a better report card.

Brian Landes manages Geographic Information Services (GIS) and location intelligence for Transwestern. Through the latest technologies and methodologies, he provides Transwestern's professionals and clients the clearest and most extensive research possible.