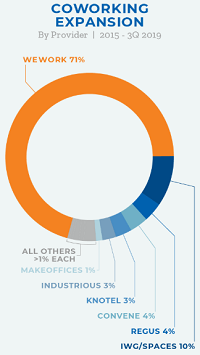 HOUSTON – A number of U.S. markets could feel the impact of WeWork’s setback as landlords wrestle with how to fill space in a cooling economic environment. This analysis is shared in Transwestern’s latest research report, Where WE Go From Here, which examines the extraordinary growth of the coworking sector, WeWork’s strategy and circumstances before and after its failed IPO, and practical considerations for stakeholders in markets with high WeWork saturation.

According to the study, when comparing coworking expansion to the growth of top industries nationally since 2015, coworking ranks ninth. Just prior to WeWork’s IPO, momentum in the sector accelerated dramatically, improving its ranking to sixth among all industries through the third quarter of 2019, and by itself accounting for nearly 8 million square feet of absorption.

“WeWork committed to more than half the total space it has leased within the past two years, at a time when rent was rising nationwide,” said Jimmy Hinton, Senior Managing Director, Investments and Analytics. “Notably, more than a quarter of that space remains ‘unsold,’ presenting a significant amount of financial liability for the company. Today, WeWork is pressed to try and market more than 7 million square feet of space to users as the economy is beginning to slow and businesses are taking a cautious stance in an uncertain political environment.”

Hinton explains that WeWork’s business model, grounded in its strategy to build communities by saturating select markets, was predicated on positive leasing spreads between its own base rent and that of its sublessees, an increasingly difficult balance as prevailing market rents increased over time.

“As a result, risks inherent in WeWork’s business plan would most probably have played out in periods of adverse market conditions,” he said. “As we now know, such circumstances came in the form of restrictive capital supply to WeWork, not from a dearth of tenant demand.”

As the company explained in its IPO, WeWork’s workstation pipeline included five distinct phases – Find, Sign, Build, Fill and Run. The first three categories captured locations before opening, while the last two reflected open locations. As of November 2019, 66.6% of WeWork’s Build space, 20% of Fill space, and 6.5% of Run space was vacant nationwide, with Atlanta exhibiting the greatest percentage of availability, at 42.4%, compared to the total market portfolio.

The report concludes that the overwhelming majority (90.5%) of risk is related to lease commitments still in the Build and Fill phases – in other words, where WeWork is constructing space it intends to sublease, or is currently subleasing, to corporations or individual memberships. Of the top five metros as measured by WeWork total square feet, New York, Washington, D.C., and Los Angeles have the greatest percentage of available space classified in these phases.

“By no means are we undermining the value of the coworking model, which has strong merits and a host of viable providers, albeit all with significantly smaller portfolios than WeWork,” Hinton said. “Rather, we aim to proactively equip coworking space users, building landlords leasing to WeWork, and investors near WeWork locations with market intelligence that will inform their decisions in the months ahead.”