We are approaching a significant milestone. If the U.S. economy continues to grow through June, it will mark the longest economic expansion in the modern era.

Commercial real estate markets have ridden this wave to all-time-high valuations, and stakeholders continue to be optimistic. Institutions will continue to invest hundreds of billions of dollars in commercial real estate this year. However, not surprisingly, given the asset appreciation and cost inflation caused by a 10-year run, capital providers are heavily scrutinizing deals.

10 Years Ago: A Market Starting Over

What initially appeared from a cost basis to be a good purchase was overshadowed by financing uncertainty, unease about future job growth, a lack of comparable sales data and other issues. Despite some legitimate concerns, those who had capital and pulled the trigger were, quite often, handsomely rewarded.

Current Climate: How Long Can It Last?

As we near what may prove to be a noteworthy June, the commercial real estate market is booming. Property transactions during 2018 remained competitive and continued to drive up values. RCA reported individual property sales in 2018 hit an all-time high. Additionally, RCA’s commercial property price index for all property types increased 6 percent from the 2017 level. The index shows that today’s pricing levels are 30 percent higher than those reported at the peak of the previous cycle in 2007.

The 10-year expansion, record-setting transaction volume and strong rent growth have brought on a new set of concerns for investors. High land and construction costs, a tight labor market and longer permitting processes have become tremendous obstacles for new project development, which inevitably increases the cost to carry an asset.

In addition tothe tangible costs, bond market volatility in the past six months ahs added to the uncertainty regarding the future level of long-term interest rates. This is all compounded by a sentiment in the capital markets that a recession is likely on the horizon. Recently, the three-month Treasury bill and 10-year note inverted, which last occurred in 2007, ust months prior to the last recession. Although, some are discounting this by arguing that the relationship between the two-year and 10-year note is the one to monitor, and that has not inverted. Additionally, the Fed's balance sheet management makes for completely different circumstances than the previous inversion. Regardless, the inversion is worth noting, given that the yield curve inversion has been a reliable predicotr of an impending recession within six to 18 months.

Looking Ahead: Ready for What’s Coming?

It will be interesting to see if transaction volume can maintain the pace of the last few years as equity and debt adjust to these headwinds. Capital remains liquid and abundant, and the intriguing promise of Opportunity Zones, along with the Federal Reserve’s recent pause in increasing short-term interest rates, provide extra wind in the sails for near-term commercial real estate investment.

At the top of investors’ wish lists are projects with a unique story, such as a low-cost basis, differentiated product, strong pre-leases or minimal rollover risk. Not surprisingly, projects structured for a downturn with minimal downside risk will have a competitive advantage.

Ten years of economic expansion is a rare accomplishment and one that positioned the commercial real estate market to capture record gains. The market remains hot, and investors are committed to deploying cash. Market players are grappling with late-cycle issues, including high costs and a strong probability of a market downturn. However, smart and disciplined underwriting at this mature stage in the cycle may well keep the current expansion on its historic pace. 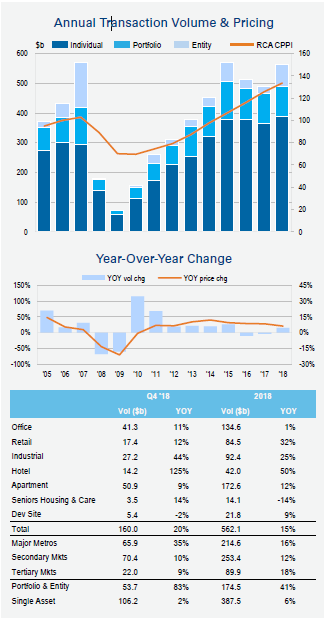