As the world becomes increasingly interconnected, the efficient distribution of goods is critical to the global economy. The timely delivery of those products and supplies across the country relies on a sophisticated supply chain connecting major U.S. port regions. As the backbone of nationwide logistics, industrial real estate has become a hot commodity.

The United States functions as one large island relying heavily on shipments to and from Asia, South America, and Europe. The 360 U.S. ports alone handle more than two billion tons of cargo annually. Such volume makes ports the most critical transfer point in the nation’s supply chain. This places enormous pressure on efficient operations, risk mitigation and the industrial real estate that supports international trade. 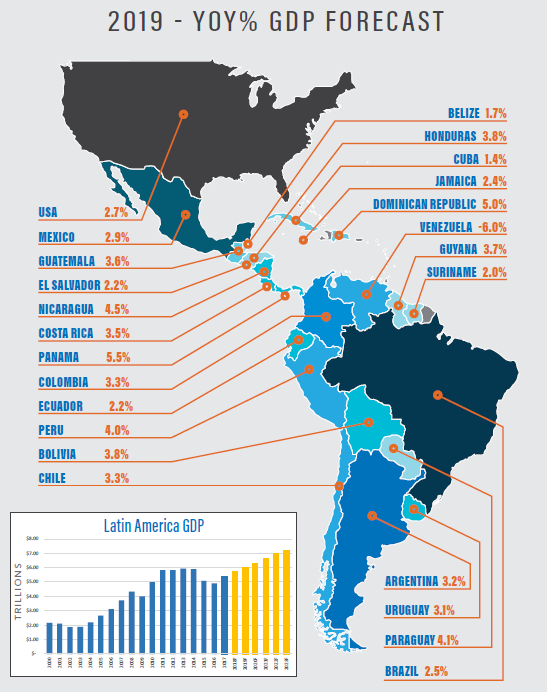 Due to trade conflicts, Mexico is now the leading trading partner for the United States. China has dropped to third following tariffs that have put increasing pressure on the price of produce and other goods. Threatened increases in tariffs on Mexican goods could put an additional strain on products needed by American businesses and consumers. Despite these uncertainties, the industrial real estate that supports the nation’s active ports continues to flourish.

The South Florida region encompasses Palm Beach County, Broward County, and Miami-Dade County. It is the only region that provides direct access to Latin American trade. As such, four out of the top five trading partners with South Florida are Latin American countries. With a resurgent Latin American economy, South Florida ports are more active than ever. Port Miami ranked 16th and Port Everglades was 18th among the top 150 U.S. Seaports in 2018 volume. As a result, South Florida's trade with the world increased by 6.51% in 2018 to $53.2 billion.

The density of South Florida’s logistics infrastructure, including warehouses, distribution centers, rail networks, and trucking hubs, is extraordinary. This may account for why South Florida’s industrial market absorbed nearly 1.7 million square feet between fourth quarter 2018 and second quarter 2019. That period was the strongest performance seen in the region in four years. The ports of South Florida are a major economic driver for the region, with a far greater reach than one might expect, as shown by this interactive map:

In contrast to the South Florida region, volume has been down for the Port of Los Angeles and Port of Long Beach. From January to July, combined loaded container volumes moving through both ports was 6.8 million TEUs (Twenty-Foot Equivalent Units). This amount is down 3.9% from the 7.1 million TEUs reported last year. The decrease in volume is a direct result of tariffs adversely affecting the supply chain as well as regulatory uncertainty. However, 861,081 TEUs of cargo passed through the Port of Los Angeles in August, a monthly record.*

After recording record-breaking cargo volume through the first five months of the year, the Port of New York and New Jersey climbed to No. 2 in the U.S. by cargo shipped thus far 2019. This marked the first time in decades that it was ranked as the second-busiest port, surpassing Long Beach. The five-month total was 4.3% higher than the same period in 2018, a record-setting year for cargo volume.

Increased cargo volume has triggered insatiable demand for industrial real estate. In New Jersey, occupancy levels have increased from 90.3% to 96.4% since the Great Recession, including 25 consecutive quarters of positive net absorption. Since the raised navigational clearance was completed on the Bayonne Bridge in mid-2017, more than 23 million square feet of positive net absorption has been recorded.

Port Houston continues to break records following several expansion projects in conjunction with the expansion of the Panama Canal. Activity is currently up 12% year over year with 1.5 million TEUs in the first half of 2019. Handling over 70% of all containers that move through the U.S. Gulf of Mexico, Port Houston continues to see demand increase for imports, while exports remain robust, driven by petrochemical and resin markets.

The increased activity through the port is having transformative effects on Houston’s industrial market as just under 20 million square feet is currently under construction. Absorption for the market has been red-hot, averaging 10 million square feet annually during the previous three years, with mid-year 2019 over 6 million square feet. Considering the strength in the manufacturing and petrochemical industries, alongside e-commerce’s rise and Houston’s growth into a regional hub for markets such as Austin and San Antonio, the Houston industrial market is set to continue its strong performance over the near future.

Hundreds of ports across the world ship thousands of loaded containers each day, playing a crucial role in facilitating global trade. The revenue generated from trade makes up about a fifth of the global economy. Ports ensure economic growth, job creation, and competitive world markets.

The importance of industrial real estate and supply chain optimization will only continue to grow. The high demand and rising rental rates are pushing industrial users farther out from ports where space is less expensive. Simultaneously, industrial real estate developers are still looking for opportunities to construct new buildings. In fact, the volume of new industrial construction is more than double that of five years ago. Overbuilding – which affected sector performance in previous cycles – does not seem to be a threat. Labor challenges, rising land prices and trade disputes are keeping construction in check.

However, there may be a surge in container volumes this fall from U.S. importers and retailers filling their supply chains for the holiday shopping season. This should stimulate port activity and demand for industrial real estate nationwide for the balance of the year.