To address the homeless crisis in San Francisco, Proposition C was passed last November by a simple majority of votes. Prop. C is a gross revenue tax that affects all businesses in the city with an annual gross revenue of $50 million or more. Pioneered by homeless advocacy group Our City, Our Home, the revenue generated will go toward assisting the homeless through permanent housing and social services. Despite the well-intentioned purpose, Prop. C has been highly debated, with politicians and business leaders falling on both sides.

Under Prop. C, an estimated 300 to 400 companies, representing 15% to 20% of the employer base, will be required to pay an average of 0.5% on gross revenue depending upon the type of business, as outlined below. Additionally, any company with a gross revenue greater than $1 billion will be subject to a 1.5% tax on its payroll expenses. 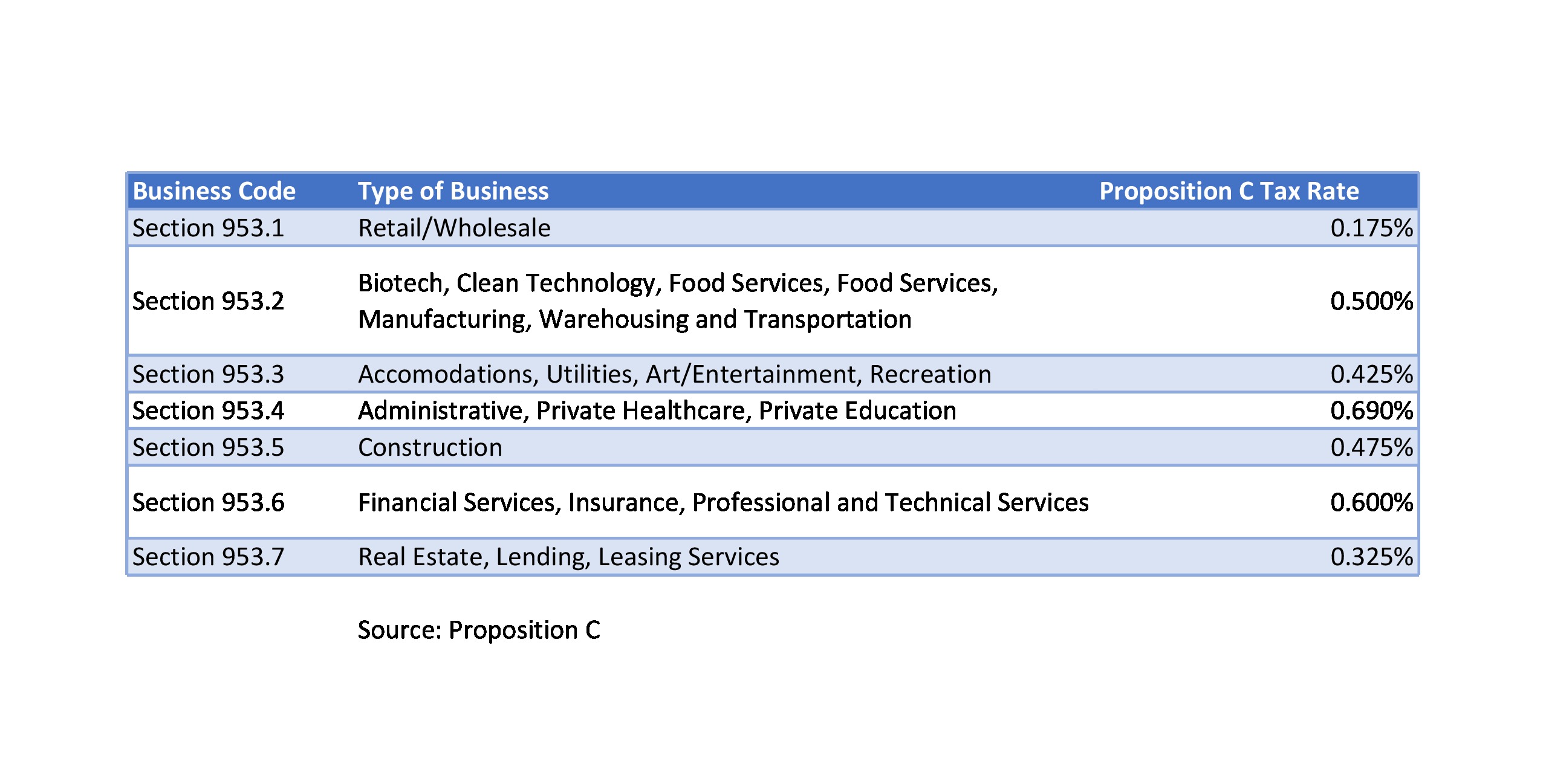 Proponents of Prop. C refer to the homeless crisis as an issue the community has a moral imperative to solve. To demonstrate, Salesforce CEO Mark Benioff gave a personal $7 million contribution to Our City, Our Home. Beyond the reason of the dilemma itself, the argument for Prop. C is that businesses recently received a 14% tax break from the federal government. Supporters assert this minimized the cost to companies in comparison to before the tax cuts.

Opponents argue the city already spent roughly $380 million toward the crisis in recent years, and homeless statistics stayed the same. Critics are concerned about the lack of both appropriate safeguards and accountability for how the tax revenue would be spent. Currently, there are 13,000 companies in San Francisco generating $880 million a year in tax revenue. Prop. C would add $250 million to $300 million to that amount. Additionally, some business leaders assert that taxing certain businesses at higher rates is unfair. For example, Square is estimated to pay roughly $20 million in taxes while Salesforce, a significantly larger company, would pay $10 million.

However, the law is being held up in legal proceedings arguing against the legality of the proposition passing. The main point of contention is whether ballot initiatives brought by citizens require a simple majority or super majority to pass. With litigation filed against Prop. C, the San Francisco government cannot use any of the tax funds it collected until the legal issue is resolved. This could potentially tie up the tax revenue for years. If deemed illegal, the city would have to pay back all taxes received. The mayor has issued an incentive for businesses to “pass through” their taxes by allowing the city to use the funds in an exchange for a 10% tax credit. How many companies will elect to give up millions of dollars is yet to be seen.

City economists predicted only 875 jobs would be lost over a 20-year period due to Prop. C. However, Square is relocating its headquarters to Oakland, becoming the first company to do so since Prop. C passed. At 350,000 square feet of office space, Square has already taken 300 to 500 employees and leased enough space for the full 2,000 to relocate.

While the local and national economy is currently prospering, when the market turns, the margins of profit and gross revenue will subside. The viability of a business located in San Francisco will become increasingly less manageable due to extra taxes and red tape. San Francisco will need to carefully balance using taxes toward issues like homelessness while not pushing the businesses generating that tax revenue out of the city.

Erik Tollefsen specializes in research and analytics for Northern California.