An Inside Look at the Purple Line

The Purple Line is a 16.2 mile, east-west light-rail public transit system that will connect Bethesda in Montgomery County, Maryland, to New Carrollton in Prince George’s County, Maryland. Construction is slated to begin by late 2016 and predicted to be completed by March 2022. The Purple Line will connect to the Red, Green, and Orange Metro lines in addition to Amtrak and MARC commuter rail stations. Owned by the Maryland Transit Administration (MTA), the Purple Line will be constructed and operated through a public-private partnership. It will cost $2 billion to construct and another $3.6 billion to operate over the life of the 36-year contract. Fares are expected to start at $2 and will be integrated with the Metro’s payment system. The MTA predicts there will be 69,000 daily riders in 2030 and grow to 74,000 in 2040. 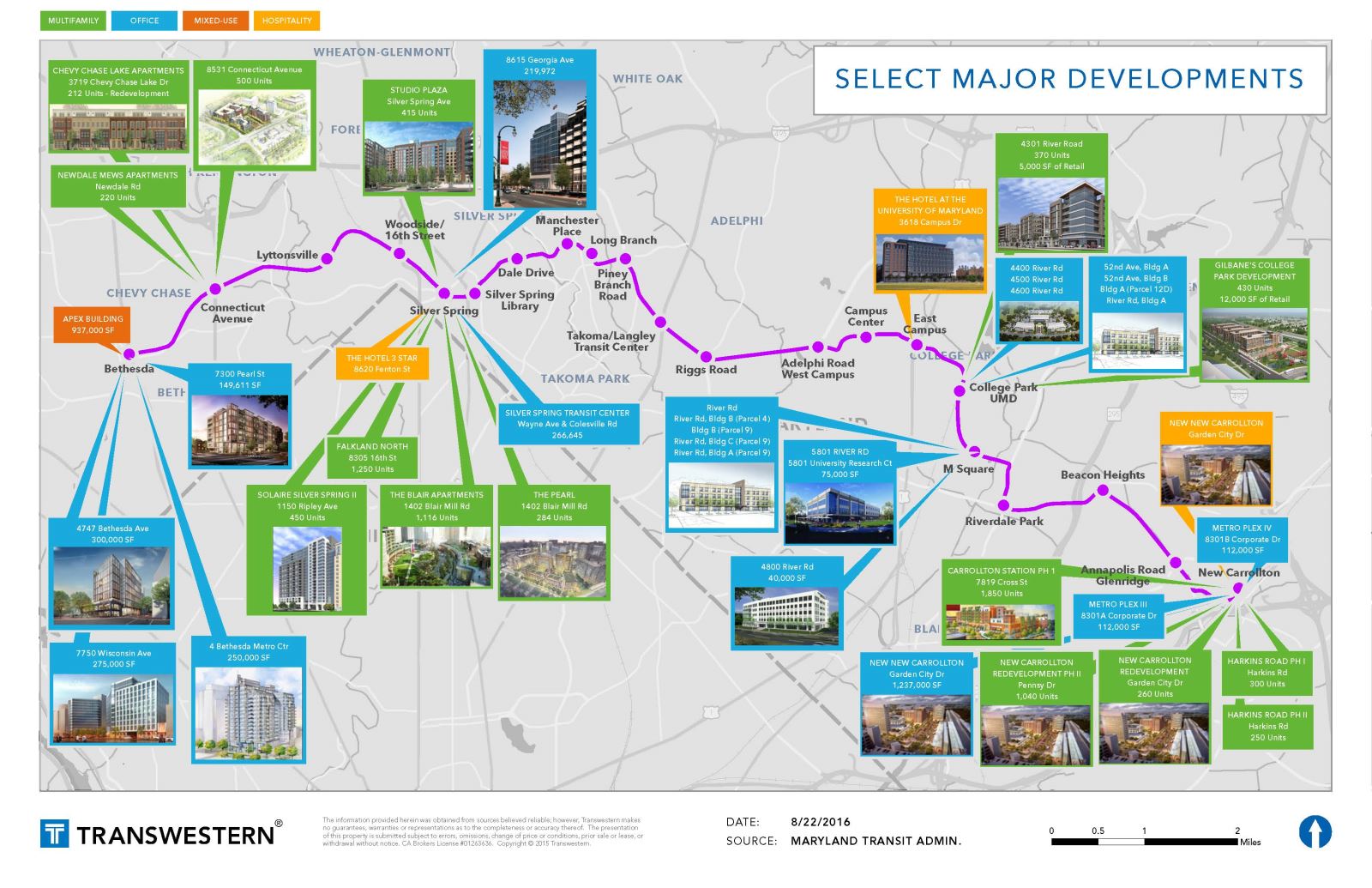 Projections show it will take 17,000 cars off the road every day, reducing the consumption of gasoline by 1 million gallons annually and mitigating harm to land and water resources. Because it runs on electric power, it will also reduce air emissions.

Not only will the Purple Line improve east-west travel within Suburban Maryland, but it will also help the economy. Over 6,300 jobs will be added during its construction with an operations and maintenance facility built in Prince George’ County. In addition to the 6,300 construction jobs added, improved connection between communities along the Purple Line could add 27,000 jobs and $635 million annually in federal and state income tax and property tax revenue, according to The Washington Post.

Several new mixed-use, office and multifamily developments have been planned or broken ground surrounding many of the Purple Line stations, as developers are seeking to take advantage of the desire to live and work near mass transit. In total, there is nearly 15 million SF of planned development that includes 9,000 apartment units and 5 million SF of office. Transit-oriented development at the Purple Line stations would further help the revitalization of suburban neighborhoods by increasing property values and bringing new housing and business opportunities to underdeveloped areas.

The Silver Spring Transit Center has 6.1 million SF of planned development within a half-mile radius of the station, the most of any Purple Line station, including 12 multifamily projects, five office buildings, and one hotel.

Construction of the Purple Line could be delayed. On August 3, 2016, just four days before Maryland officials were scheduled to sign the agreement to build the Purple Line, a federal judge ordered the project’s ridership forecasts be recalculated due to Metro’s declining ridership and overall deterioration. The judge said he could not overlook the recent major issues with Metro including derailments, long delays, safety concerns, declining ridership, and train malfunctions. Attorneys for both the MTA and federal government said that recalculating the ridership forecasts could delay construction by six months, which would in turn affect the project schedule and financing arrangements, putting the whole $5.6 billion, 36-year contract in limbo.

Since the judge’s decision to reexamine ridership forecasts, government officials have filed court documents requesting the judge to reconsider the ruling. The state of Maryland claims that further delays will cost an additional $13 million per month. Despite this uncertainty, preliminary Purple Line work continues.