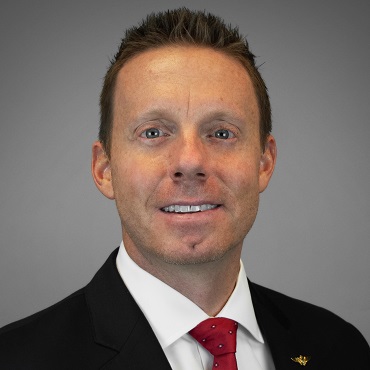 As a Vice President with Transwestern’s Transaction Sciences Team, Brad is responsible for business development, financial analysis, and client advisory on complex real estate transactions. By translating his experience with operational planning and efficiency, Brad delivers a unique analytical capability to brokerage that creates an advantage for clients seeking comprehensive real estate solutions.

Prior to joining Transwestern, Brad served as a naval aviator in the United States Navy from 2007 – 2018, flying the Sikorsky MH-60S Knighthawk. During his time in the Navy, he deployed to the Western Pacific, Eastern Mediterranean, Horn of Africa, and Middle East supporting national security strategy and US interests in multiple campaigns.
Brad also has experience managing multi-faceted operations and projects with a track record of applying a process-driven analytical approach to inform decisions. Additionally, during his time aboard the aircraft carrier USS George Washington (CVN 73), Brad managed a high-profile program with a seven-figure budget and regularly closed out the year under budget while meeting 90% of GW’s fiscal goals.

Brad is a member of the Urban Land Institute and the Society of Real Estate Professionals. In 2018 and 2019, through the Resilience Education Program sponsored by Darden, he served as a volunteer instructor teaching Business Fundamentals and Financial Management to prisoners at a Virginia state penitentiary.

Brad holds a Master of Business Administration from the University of Virginia Darden School of Business, a Master of Science in Operations Research from the Naval Postgraduate School, and a Bachelor of Arts in Political Science from the University of Colorado at Boulder.
His Operations Research master’s thesis, subsequently published in the MORS Journal, focused on the use of open-source socio-economic data to help inform real estate leasing decisions for the Navy Recruiting Enterprise.